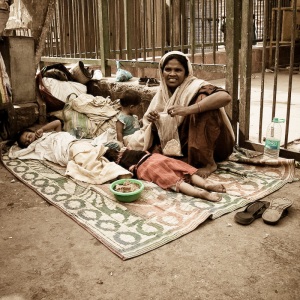 Julia flew away to India this evening. I had no idea that I felt protective of her until I was waiting for her at a hydrant on Sixth Avenue and Bleecker while she went into the CVS to buy razors and garbage bags for friends living in the north, in Himachal Pradesh, where, unless you have a sharp rock and a hungry goat, you’re shit out of luck on having smooth legs and place to put your trash. (She was going to add the razors and garbage bags to her already hefty collection of gifts: furniture polish, a pumice stone, underwear from the Gap, cheap slippers, a pair of giant men’s boots topped with fur, vitamins, a power cord for a French nun, six wine glasses. and a duffel full of other things I can’t mention or she’ll get mad). Anyway, the thought of her flying across the ocean and landing in Delhi alone suddenly made me nervous and sad—I can’t even go into it. Suffice it to say that the last time Julia flew into Delhi, she ended up calling me from a cardboard box* in the middle of the night, in her sleeping bag, crying, saying something about a lost taxi driver and pigs or cows in the middle of the road, and not being able to get through. Monkeys scare her. And men think she’s hot. (Already a drunk guy tried to pick her up at in the airport in Newark, twice.)

Sigh. She’s on an adventure. She will break free of many of her habits and dance in that space, while the monks chant and the little dogs are eaten by maggots. India! Julia in India! The truth is, she is never happier. She will give her gifts away. She will drink buckets of chai with the Buddha. She will make more, even though it’s someone else’s job. She will pass around the protein bars. She will get insecure. She will laugh and cry and it won’t make a bit of difference which one it is because it’s all, every bit of it, the same: this fleeting, holy dream.

*This is one of those lies I told you about.

2 thoughts on “Julia Away”