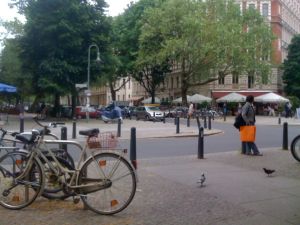 It’s been a long time since I sat down at a table where there was an ashtray. This is what I saw from this spot right here, where I ate a breakfast that means I can’t eat lunch, and maybe not even dinner. I won’t tell you what it was, except to say it was a Berlin specialty. Anyway:

1. Two healthy dogs crossing the street unaccompanied by humans (not together).

3. A man walking a bike with one hand, and holding a bouquet of five unopened pink peonies in the other. (Not related to the bride.)

4. A young man suddenly bend in and kiss the temple of the young woman he was walking with.

5. More than ten pairs of Converse sneakers. More than ten jean jackets. More than five young men wearing T-shirts with numbers on them, as if they were soccer players (it’s day #2 of the World Cup).

6. A dog in a pair of pants, which seemed to be what was attaching him to his leash.

My landlady told me that there are more pregnant women in this neighborhood—Prenzlauer Berg—than any other neighborhood in the world. Can that be possible? I’m going to add the word “Western” before “world,” and it would seem more plausible. I have seen a few hugely pregnant ladies (and was kept up for much of the night by a crying infant, and then his crying older sibling), and I haven’t been here long. I have to say, though, that I am almost shocked by how much sweet affection between men and women I’m seeing in this neighborhood. Not just couples holding hands—couples on, like, quaaludes: they’re so relaxed and happy their joints look like you could bend them in more than one direction. Lots of bodhicitta.

Another thing I’m noticing is that a lot of folks in this neighborhood look like they could be movie stars. Johnny Depp-types, Ellen Page-types, and then the older women—oo-la-la. They look like sixties movie stars. Like Julie Christie, or like Frances McDormand in “Laurel Canyon.” It sounds stupid but now I get it: It’s not only that European movie stars are beautiful—they’re also European. Sigh.

The birds sing the same, though.