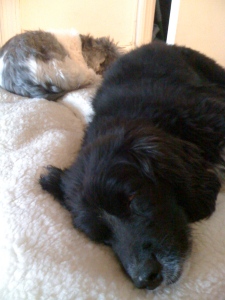 So the apartment—with three dogs, a loud cat, a few rickety houseplants, clothes drying on racks, and funk accumulating everywhere—is so filled with need, at the moment, that I felt my mind, last night, shrinking to the size of a pistashio nut. I would say I was entertaining murderous fantasies, but there was nothing entertaining about it: the balcony, the microwave, the garbage chute—everything was beginning to look like a murder weapon, and my victim? Scout.

Poor Scout. His circling has gotten incessant, and he’s so prone to pee and poop in the hallway or elevator that I have to carry him outside. He won’t eat unless I hold his bowl up to his face for him, and when we go for walks with the other dogs he slips his collar because they’re pulling so far ahead and he’s lagging so far behind. Then he runs in the opposite direction because he can’t see and he’s afraid he’s been left behind. Somehow, by last night, I had convinced myself that I could not go another day like this: without him, I would be free.

Needless to say, I needed some relief from all the feelings that Scout was bringing up. So I talked to myself. I said, “Deitch, they say that if you really want to be happy, help someone out. But, honestly, Deitch, that notion has always been a bit unappealing to me: I really would rather go down to Gitane and have a cafe creme.”

Luckily, I’m just beginning to grok, though, the starring role that selfishness plays in my life.

I’ve known this. I know that, starting in the last few weeks, the minute I touch his head, he lays it in my hand and shuts his eyes. I’ve known this. And what’s more, I know that he sometimes forgets how to drink, and stands by the bowl looking at it, but damn if he knows what it’s for. So we made that trip to the kitchen together, and I put water on his lips, and finally, after a few more splashes, he drank.

I didn’t feel better last night. I still felt uptight, and also like a heel. But you know what? I woke up this morning with the honest wish to give Scout a good day: to put an egg in his kibble, and take him for his own damn walk. He has made me happy for thirteen years—has been the source of so much sweet and funny love—and now, simply, he needs me.