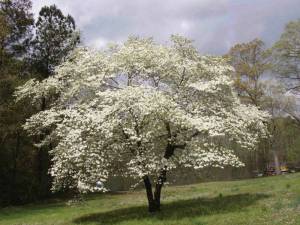 Today I was walking by a tree on 97th Street, between Columbus and Central Park West—is it a dogwood? A short tree, with an afro of white flowers? There was no one around but me, and suddenly the wind came up and hundreds of brand-new little flower petals blew into the air and drifted, like snowflakes, to the ground. It was just a quiet, natural occurrence—so very beautiful—not meant for anyone, and I was lucky enough to have been there. Afterwards, I thought to myself, about my ex-boss, “Thank you for firing me, you gigantic jerk.” Had I still have been working at that magazine, I would have missed the little flower blizzard.

And that got me thinking about my job (which I can’t really talk about since I signed an agreement, in order to get a pretty pitiful severance, not to give them bad publicity), and how I never really liked it. I kept saying this to the people closest to me and to myself, back in the day, and I think we all felt that that was just me, Deitch, being my usual pain-in-the-ass, not-liking-my-job self: It was a good job, after all.

So I got fired, and, after the initial shock, I felt really happy. I mean, I felt liberated. I was even liberated from my New Yorker job, which I never would have quit had I known I was going to lose this job. So I guess this is about intuition, and how you can really trust it.

Because the truth is, writing has always made me happy, and I haven’t been able to do it, holding down these other jobs. The years that I was freelance writer were really hard financially, but they were the best. What made me think I couldn’t do that again? What made me doubt my intuition? (Could it have been dwindling self-confidence and paralyzing fear?) Thank goodness for being fired!

It turns out you don’t die when you lose your job; people don’t turn their backs on you, or tell you you deserve it. You cry a little bit, you start getting familiar with uncertainty, and you come up with something else. If you’re lucky, and you try really hard, you love what you come up with, and it gives you time to smell the dogwoods.

Speaking of self-involvement, I remembered this thing when I was in the shower this morning: how I discovered writing.

My father had died, like I said, when I was ten, and we moved into Manhattan from Long Island a year later, so that my mother, I think, could date more easily (no judgment—it was 1967, she was 38, had three young kids, no money, and needed a plan). She enrolled me at P.S. 6, on the Upper East Side, and somehow finagled it so that I was put into the sixth-grade I.G. class—the class for so-called intellectually gifted kids. <a href="I told you already that I was a wreck, so this development was a stroke of karmic genius: If torture by humiliation at eleven doesn’t kill you, it leads you to ask a lot of important questions later on.

So it was clear that the teacher, Miss Baron, who sported a loose orange beehive and always wore red lipstick, didn’t like me. Maybe I wasn’t smart enough, or well-enough educated, or too sad and angry—I suspect it was all three. At one point, anyway, she told my mother she was going to transfer me out of the class, and my mother managed to stop her. So I’m not making it up; she didn’t want me around. Needless to say, I spent many evenings crying over the fact that my homework was actually too hard for me to do.

Somewhere in the middle of the school year, though, Miss Baron told us to write two poems, and bring them in the next day. I’d never written a poem before, but when I sat down to dutifully do it, I discovered this amazing thing: writing it down to figure it out. I had a lot to say, it turns out, but not the sort of stuff you talk about. (If you know what I mean.) I wrote one poem called “Who Am I?,” and another one about time. I didn’t consider whether or not they were good—of course, they wouldn’t be—but they just fell out, and that was a bright experience in a dark time.

The next day Miss Baron called us up to her desk, one by one, which was something I dreaded and loved. It was hard to have a conversation with an adult back in those days who wasn’t drunk and/or high,* so these chats at school, though intimidating, were an opportunity to have some sane face time with someone other than my poodle, Zsaz (who was a really good listener). Miss Baron, on this day, snatched my first poem from my hand (or so it seemed to me) and started reading, clearly expecting the usual annoying stupidity. I believed I was a fuck up, so I sat there waiting to be put down and sent off by Miss Baron with a impatient little shake of her head and a roll of her eyes.

But something else happened. I watched her reading the poem with her furrowed brow and her pursed lips, filled, like tiny rivers, with red goop, and suddenly her face changed. The lines disappeared from her forehead. Then she looked at me over the paper. It was not a happy look, or a look of relief: it was a blank look. But behind the blank I could see what she was hiding: surprise. Total surprise.

That’s how I became a writer: I wanted to see that look again. Thank you, Miss Baron, wherever you are, for giving me that. Thank you for making me a writer, however vengeful, and for kicking my ass.

*See John Updike’s amazing story on the subject, “The Lovely Troubled Daughters of Our Old Crowd.” 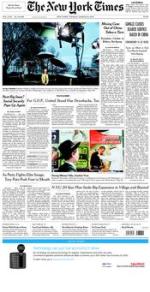 I like being naughty here in this blog, I gotta say, insofar as I can be naughty, considering my mother, daughter, old editors, potential employers, and maybe even that shithead who fired me with only two weeks’ severance are reading this. I mean, I have to keep the sex, drugs, and rock and roll…not exactly to a minimum, but—hi, honey!* So.

I actually wrote a pretty scathing post about a couple of not-so-courageous editors at that yucky rag Cosmo, but I took it down because Maudie said I had to keep the gossip, the nasty nicknames, and the stuff that would keep me from being hired to a minimum. But I thought I’d share this one story, because it’s tame and it has a tiny bit of news, sadly, that you can use. It’s only a little bit naughty. I’ll do better later, after I make sure that a big paw doesn’t come out and knock me off my stool at Doma because of this damn blog.

So, anyway, one time the New York Times hired me to write about this playwright who had done super well in regional theatres over the course of his career, but had never had a play produced in New York. Or maybe he’d had just a couple produced, but nothing significant. Anyway, finally it was going to happen—Broadway. Or maybe it was off Broadway—doesn’t matter.

So this editor from the Times** said she wanted me to write the piece around this premise: that the playwright (who I think needs to remain nameless) was having his big break. The trouble was, that he didn’t see it that way; turns out, he didn’t care about New York. I went back and told the editor that the premise didn’t really hold up without the playwright’s support—in fact, the premise should be that he didn’t care—and she said that that couldn’t be right: of course that damned yokel cared, and of course this should still be the premise of the piece. She said to go back to him. So I did—I called him again. And he said again that he couldn’t care less about New York or the editor’s premise.

The long and short of it is that the editor called him herself, got basically the same answer, but took my piece and manipulated it so that it supported her original premise. Nice, huh? All the news that’s fit to print plus the fantasies we like to add in there!

Oh, I still read the Times every day—or the website, at least, for some semblance of the truth. But for the real skinny I read Rick and George and Amy, all of whom are very clear about journalistic integrity.

*That’s a joke, Loo-loo. I know you love that shit.
**I think I have her name here in my email somewhere—hang on (scroll, scroll, scroll, no, search inbox, shit, search sent): oh, yeah—here it is!