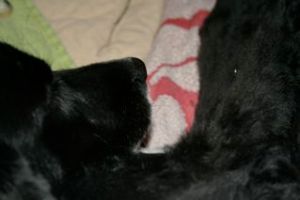 Scoutie fell asleep between my legs on the bed in L.B.’s guestroom while I was practicing, and his breathing was so ragged and shallow that I woke him up and carried him downstairs and brought him into the backyard for air. He was O.K.—he did his new thing of staggering, zombified, around the periphery at a clip, and then screeching to a halt to take a rickety shit which nearly knocks him over. He is, I’ve known from the beginning, a noisy, grunty breather, so I shouldn’t be surprised that that quality will come out more, now that he’s sick.

The day we took him from the lap of that teenager outside Wild Oats when he was three months old, we brought him home and then suddenly I had to go: I got called to interview Kate Winslet on the set of the “Titanic” outside Tiajuana, and I drove down there from L.A., for some reason, rather than flying. I was going to sleep in a nasty motel nearby, after the interview, and then drive home in the morning, but the thought of that pup, and my own little girl, pulled me back that same night. I do that sometimes, drive when I’m too tired to drive.

I got home and he was in the kitchen where we’d made him a nest before I’d left, and he wasn’t happy, being made to sleep alone. So I put a blanket on the floor and lay down beside him, and pulled him in. That’s when I heard his noisy breathing for the first time, all catches and sighs and bubbles and squeaks and clicks and groans. How do we endure the never-again?

You know some things about me now, if you’ve read through this blog. But you don’t know that for most of my life I woke up in the middle of the night very afraid. Until recently, I wouldn’t have been able to be in this house alone, except if Scout was there, when Scout was still a dog who might deter a monster. These days, though, I find that I am the one whose job it is to comfort the fearful, and deter the monsters.

There is so much about getting older that no one ever talks about. There’s losing your eyesight and losing your memory and losing your friends and not being able to eat pretty much anything without gaining weight, yeah, but there’s also how you get good at some things, in a weirdly deep way, just by virtue of having done them for so long. And you find bravery, not in your muscles and your manhood, but in your heart, which only lives exclusively in your chest when you’re young. When you start getting old, your heart runs away from you, because, whether you like it or not, it wants to love the world.

1 thought on “Listening to Dog Life”